The first of my 2 hen do's was an intimate affair in Brighton, starting with some afternoon tea in Metro-Deco 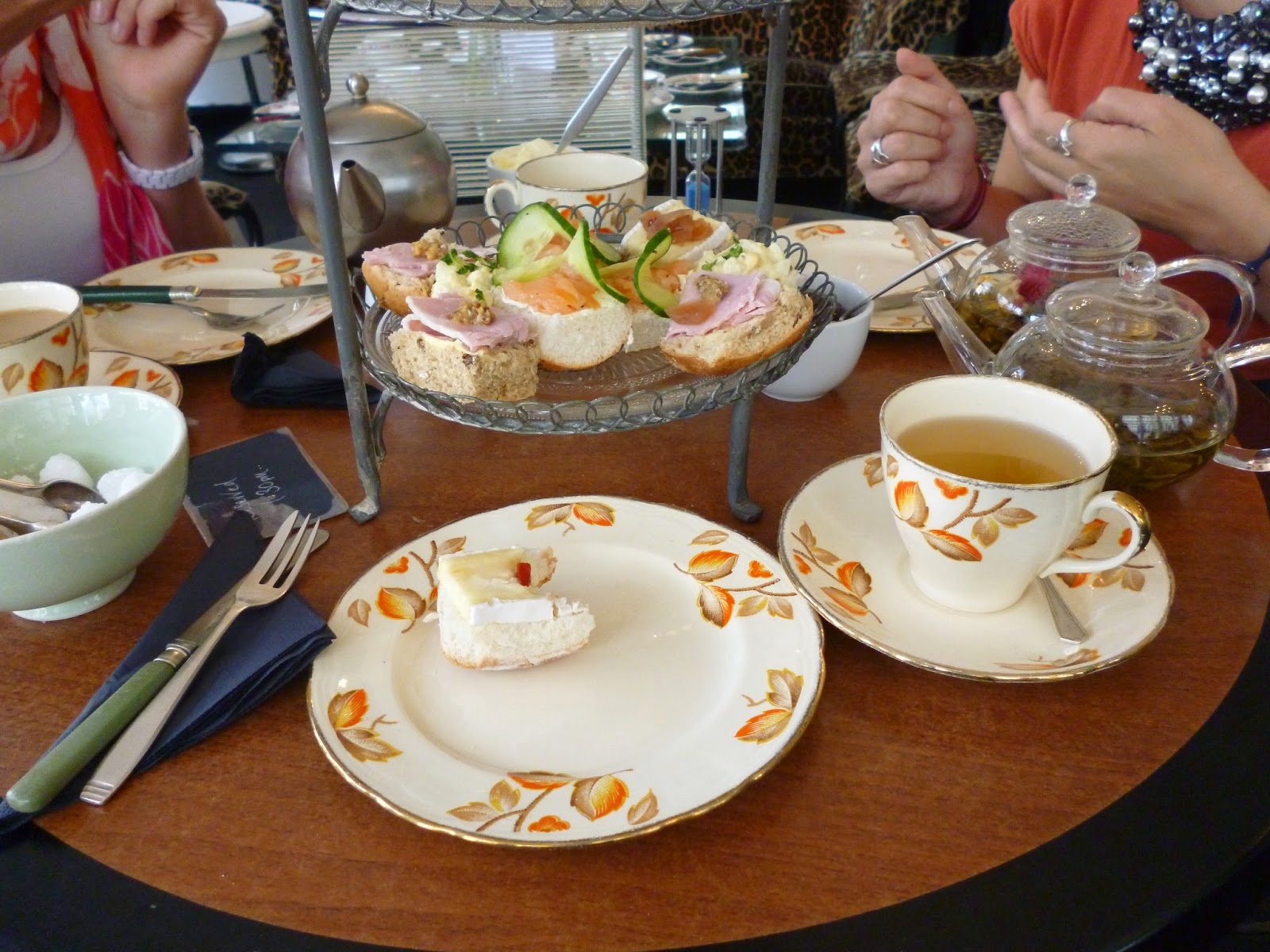 Sarah and I had one of their beautiful blooming teas, Sofe stuck with Earl Gray.

We had little open sandwiches, ham and mustard, egg and cress, brie with chutney, and salmon and cucumber.

All the old favourites.


We then had a layer of traditional scones with jam and clotted cream.

At which point I was shocked to find out Sophie had never had one before.

I know she's French but that is just crazy. I'm pretty sure it won't but her last though. 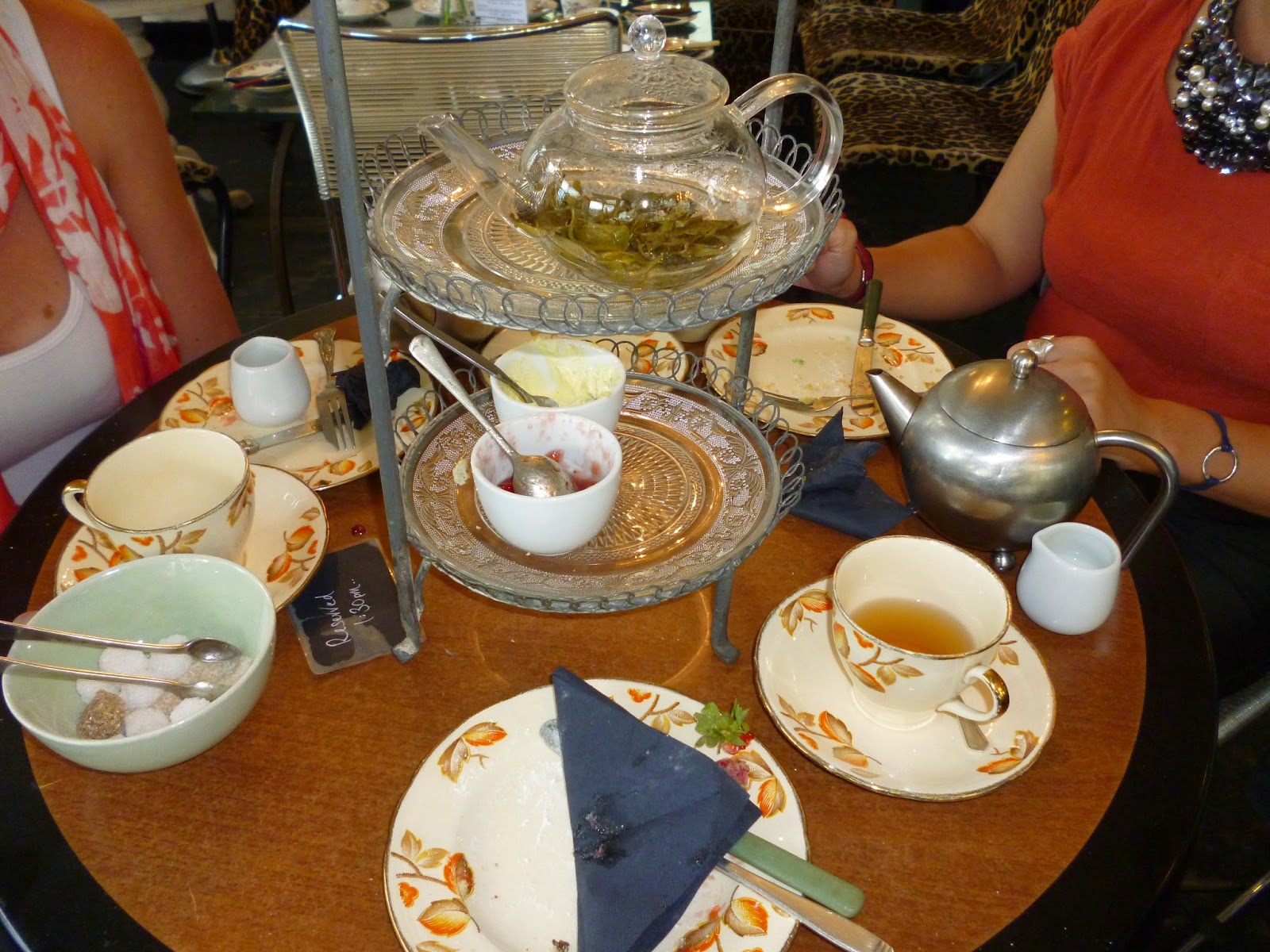 We then quickly devoured the tiny top layer cakes.

My only disappointment was that all the tiny cakes were all different flavours, and as we were sharing I couldn't really try them all.

The girls did give me first choice though, so I can't complain too much.
Next we moved on to the hard stuff, we found an interesting pub down the road and dived in for a few cocktails.

I can't remember what we had but I do remember that they were good. 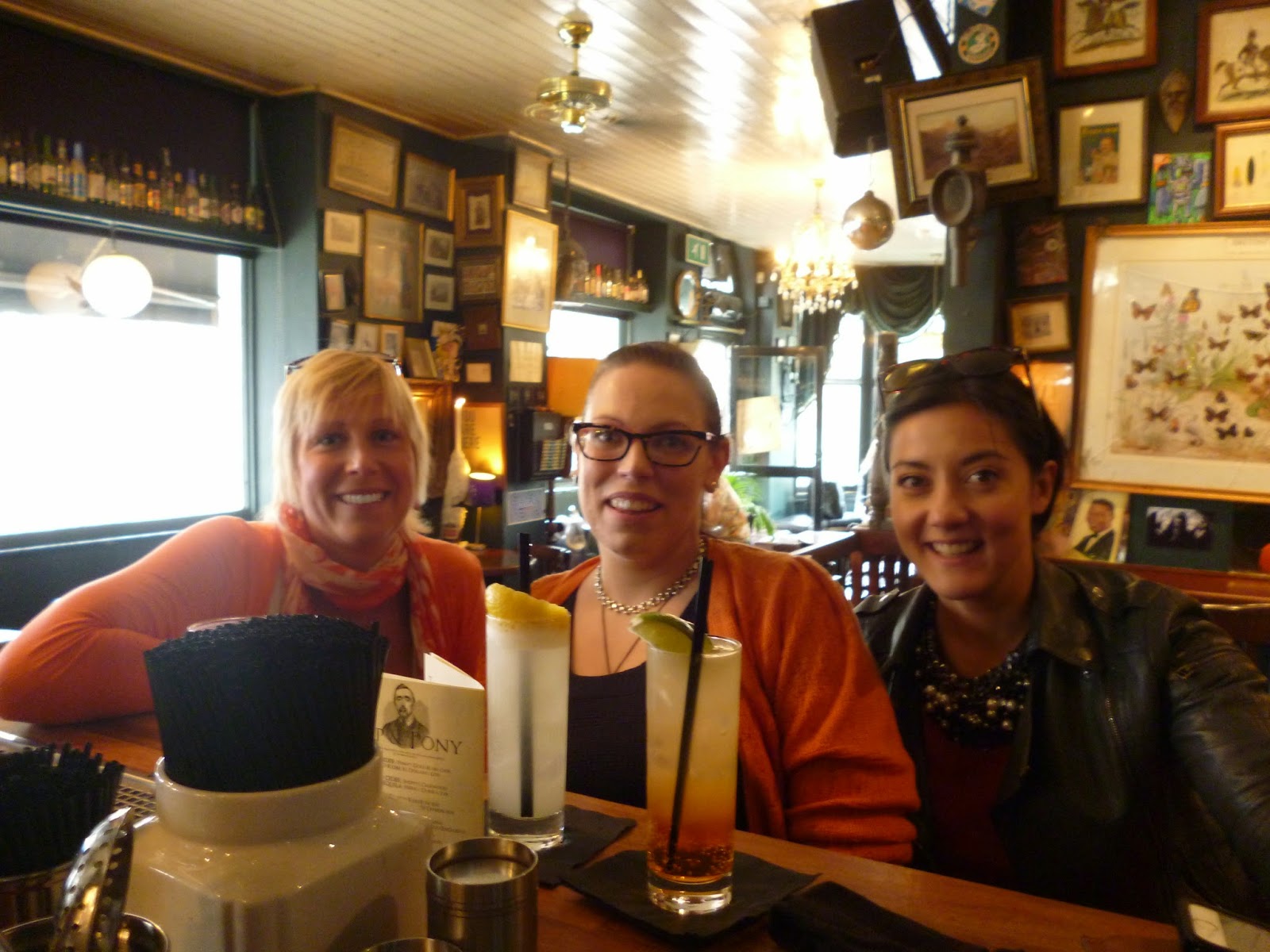 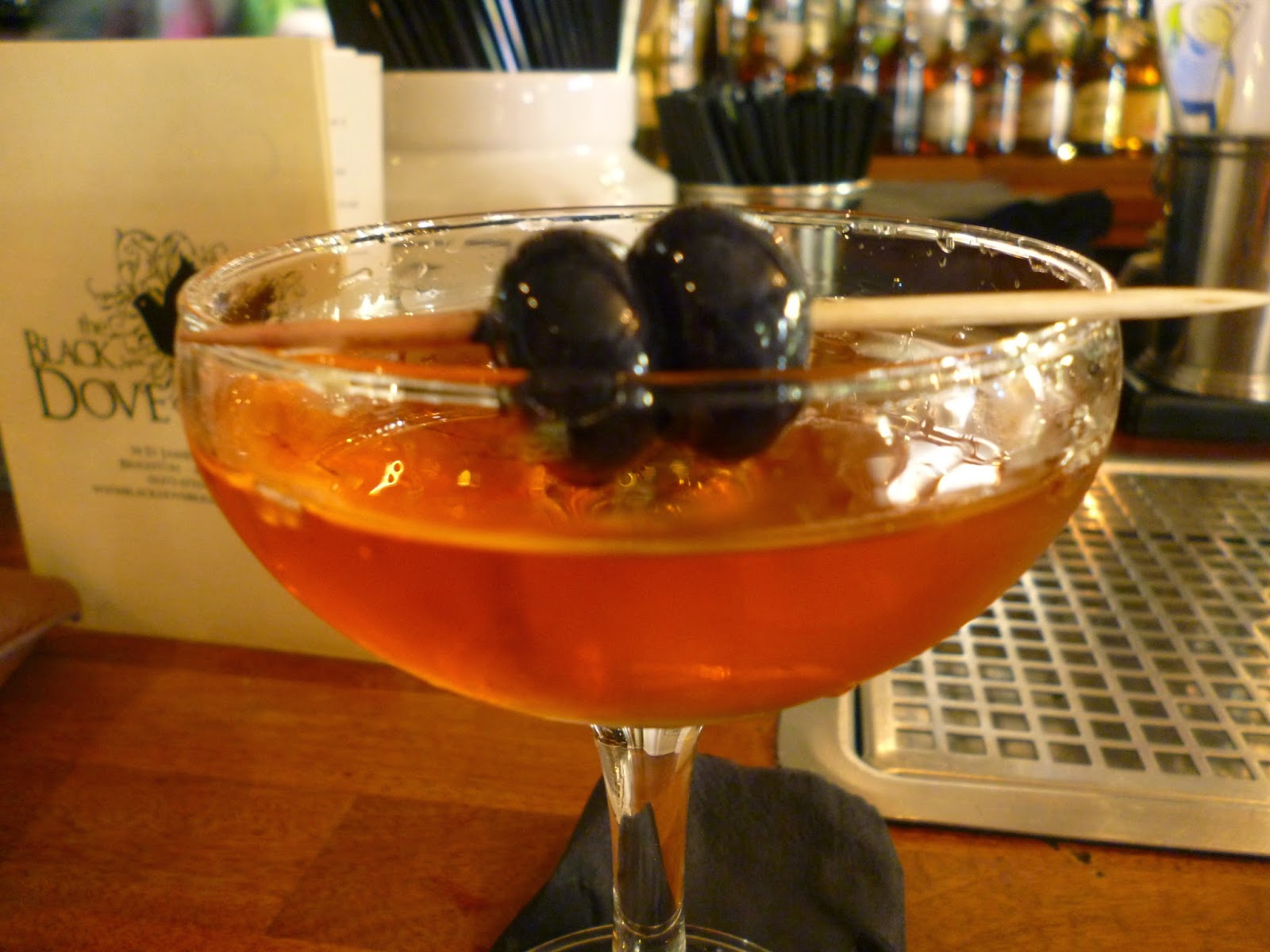 We had a few more cocktails in a couple more bars, then on to my final surprise a visit to the Dreamboys.

Now I have to admit this is not really my cup of tea, and in fact I found it quite terrifying!


All the hens and birthday girls were handed a Dreamboys sash, but once I realise this is what they looked for when dragging girls on stage it was very quickly scrunched into a tiny ball.

Public humiliation is not on my bucket list so no regrets.

We then met up with Wayne an honorary hen, and talked and danced into the wee hours before getting a cab home from The Rather Excellent Carriage Company.
Posted by Chloe D at 12:43 No comments: 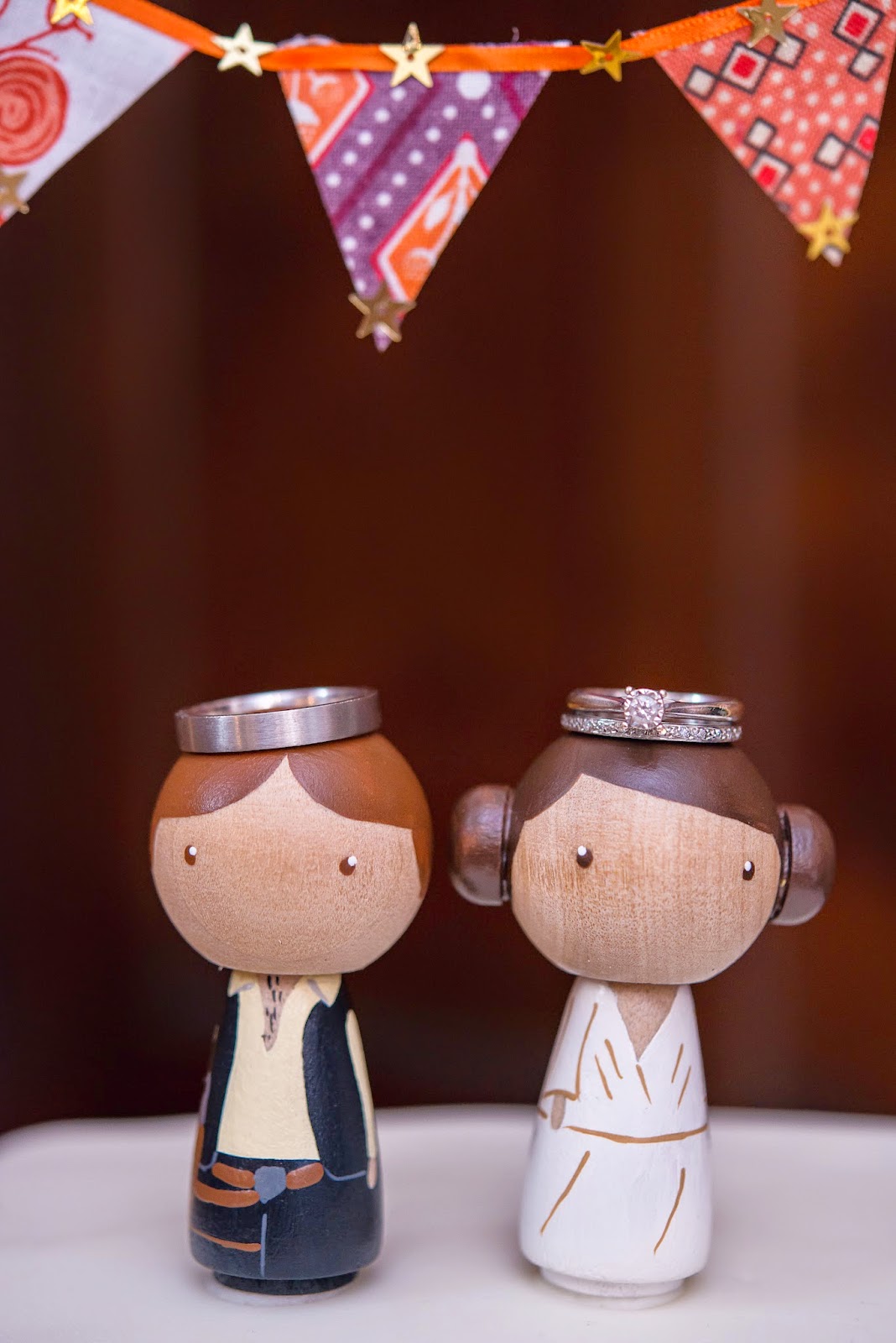 We got married just over 3 weeks ago, it seems like forever ago and only yesterday all at the same time. It's sounds so cheesy but it really was the best day ever. We had so much fun and I couldn't have wished for a better day. The weather held out, and all our friends and family just made the day so special.

Things haven't really settled down yet either, we had a much needed week away in Paris after the wedding. We managed to cram in all the sights as well as making time, for plenty of down time in various coffee shops. Then we got home to hear we have had an offer on our flat!

We managed to get in a couple of viewings and have found the perfect home, so now it time to move.

2014 really has been a huge year for us, and it's not over yet. I am hoping to do a few catch up posts to cover the hen do's and honeymoon. And now wedding planning isn't taking up all my brain space I'm looking forward to revisiting all these recent memories.
Posted by Chloe D at 07:46 1 comment: 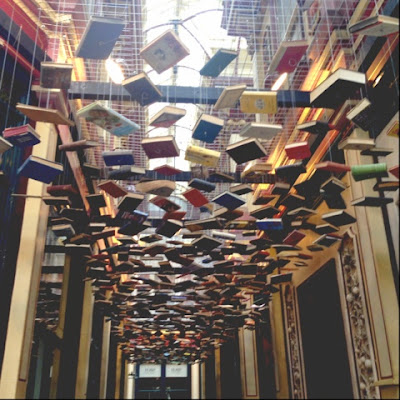 I have been feeling pretty overwhelmed lately, it seems everything is happening all at once, some things are my doing, others are not. But you know when you get to that point when you either want to smash something to pieces, or just sit in a corner and cry your little heart out. Well that's where I was on Thursday, it may have just been a coincidence that it was the day before my Birthday, or maybe that's was why I was so highly strung...

Thankfully my lovely boyfriend and I had already planned a much needed weekend away to celebrate, and re-charge. We made a pact before we left not to discuss any of the stressful subjects and just chill out. We did lapse a couple of times but on the whole we succeeded and it made the world of difference. I felt totally relaxed, and really enjoyed our break. We managed to fit in a lot of walking, a bit of art, some comedy and one or two cocktails. What more could you ask for.

Unfortunately the stress levels did creep back up on the train home as reality was getting closer and closer, but I do feel in a slightly better head space, so hopefully I will cope better and just get stuff done, instead of worrying about it.

How do you cope with stress, any tips?

If you were wondering, I am stressing about, wedding stuff, moving house, difficult neighbours and work!

Please excuse my terrible iPhone photos I did take a better camera but didn't realise the battery was flat grr.

Thursday we went to see the Eels at the De La Warr Pavilion, Bexhill. It's relatively small venue but on the odd occasion they get some really good names.

First up was the support act, Daughters of Davis. These girls were actually quite surprising, they have a slight 40's sound.  Their in-between chatter fell a little flat sometimes but they were sweet, and they can certainly sing. Check them out if you get a chance, and maybe even buy them dinner to help on their tour. 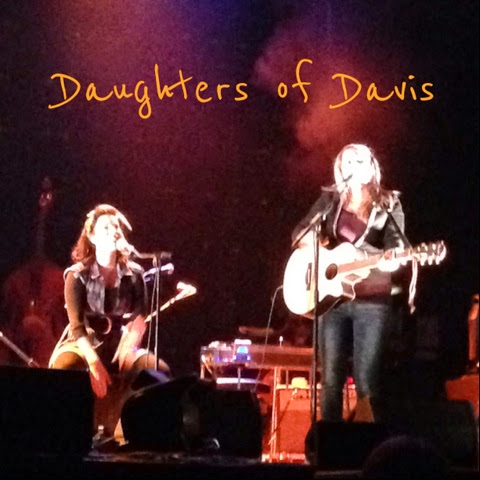 Next up were the Eels. This is the first time I have seen them live and I can't believe it took me so long. They were a favourite of mine as a teenager, and I still have big love for E's voice. Most of the set was their newer stuff, there were a couple of the oldies thrown in for good measure, although played with a twist so barely recognisable. 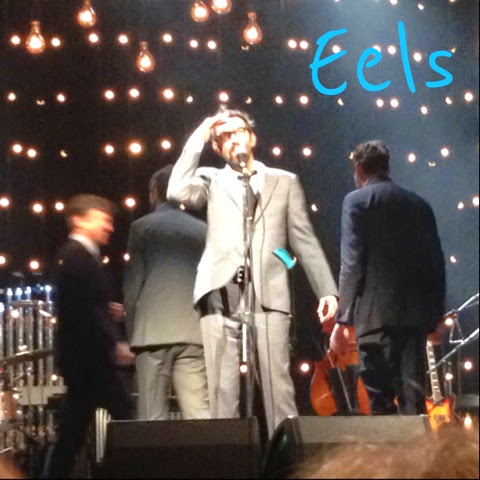 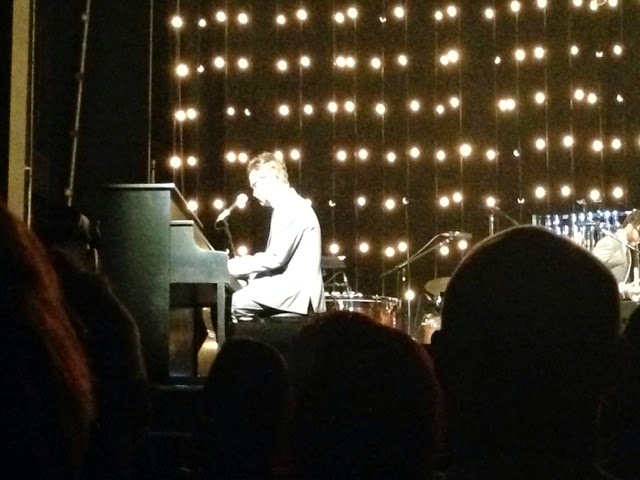 "this next song's a real bummer" 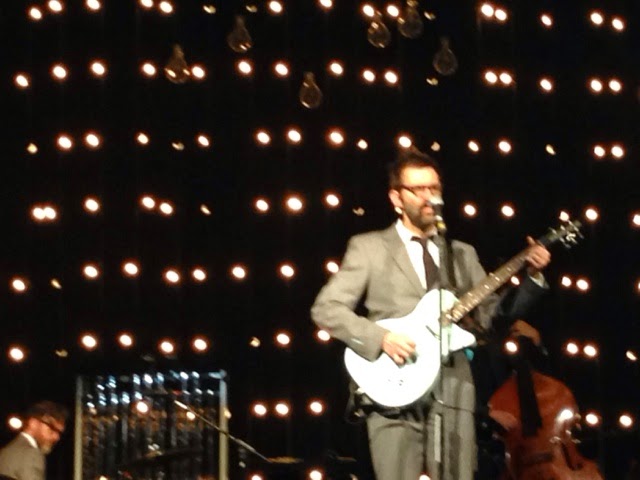 We were quite close to the front, and the lights kept coming up which strangely made it feel more intimate like the band could see you, so they really were playing for you. Didn't matter that I was there with a couple hundred other people. 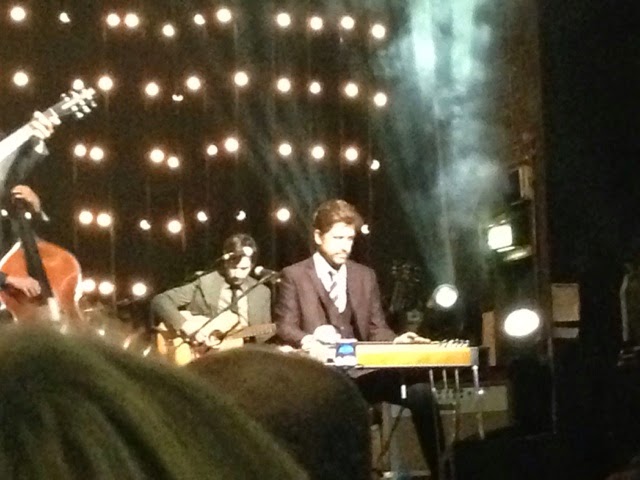 The Chet on the sad machine :o( 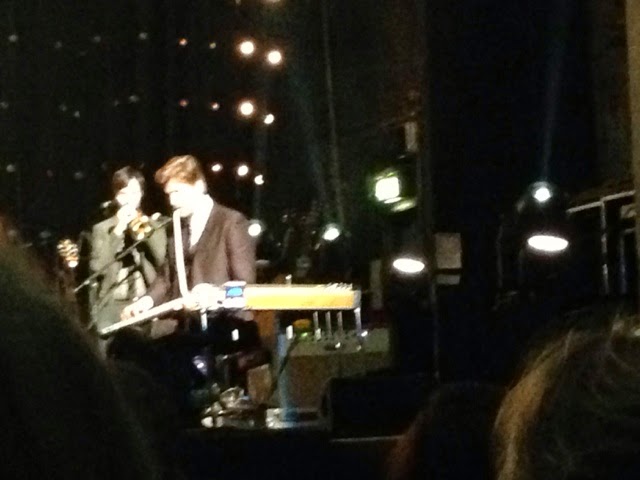 The Chet on the keyboard with a staw thingy 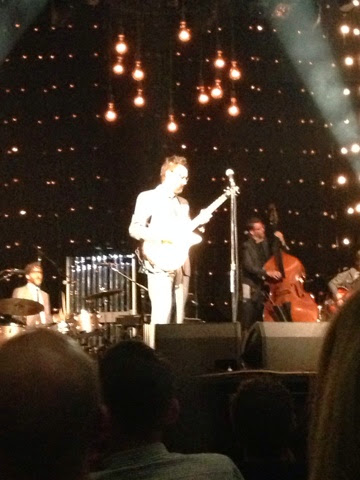 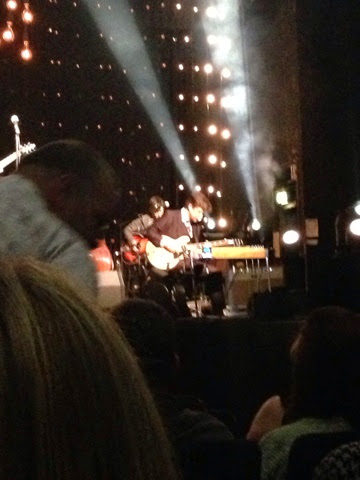 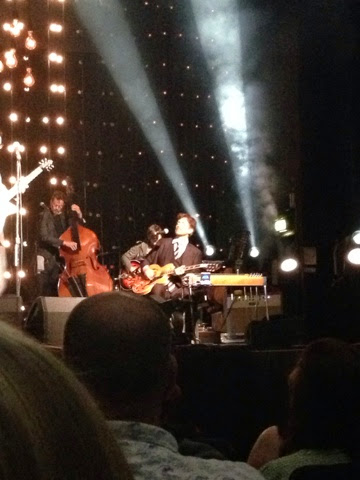 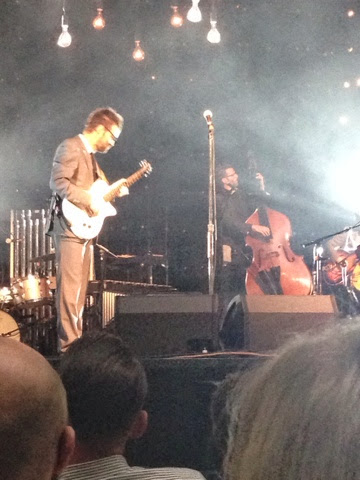 Near the end of the gig E came off the stage for a hug and pretty much got bundled by the front few rows. I wasn't quick enough (sad face) but it was fun to see. 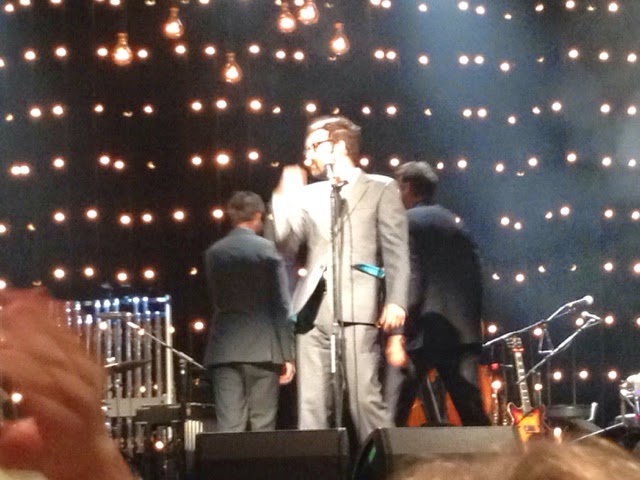 All in all I thoroughly enjoyed this gig and I can safely say I loved every second. Given the chance to see them live, I'm there. I am currently revisiting the back catalog on spotify.
Posted by Chloe D at 09:27 No comments: 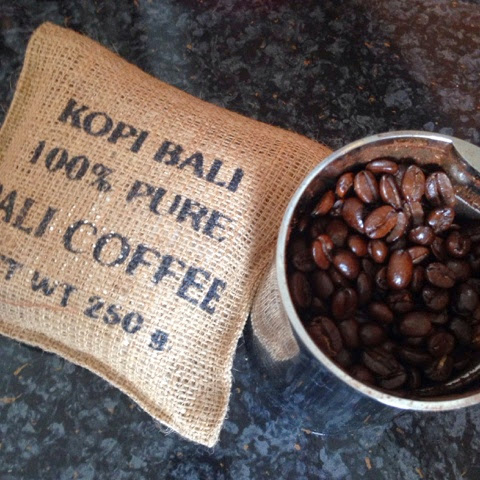 I have some serious wanderlust going on at the moment. My bestie came over on Saturday night with tales from her travels to Bali and a bag of delicious coffee as proof. It is so good, already had four pots of the stuff, shared of course.

Her stories of a massage every other day and a visit to a nigh on deserted island, make me green. But I still love to hear them and dream of getting away.

We usually get away a couple of times a year for maybe a long weekend and a week or 2 somewhere else, but with the wedding coming up we decided to wait this year. I know we have a week away booked for straight after the wedding and planning for a couple of weeks over Christmas somewhere, but I want to go now *stamps feet and pokes out bottom lip*

Oh well I guess I will just have to wait, I mean it's not really that far away (about 13 weeks! eek), I think I am just feeling a little frazzled at the moment. Time is flying and I just feel like I'm trading water, planning a wedding is not easy when you're as disorganised as me.
Posted by Chloe D at 06:03 No comments:

A Walk in the Park

Our local park is beautiful, and sometimes I forget.

It is a five minute walk from my home and I should really visit it more often. We have been having some lovely weather lately, and now it doesn't get dark until gone 9 in the evening I thought I would take advantage and go for a walk. 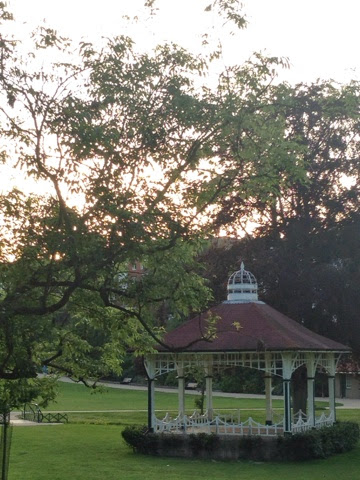 It was about 8 and nice and quiet, and although the park is on a busy road, you don't even notice once you are among the trees. 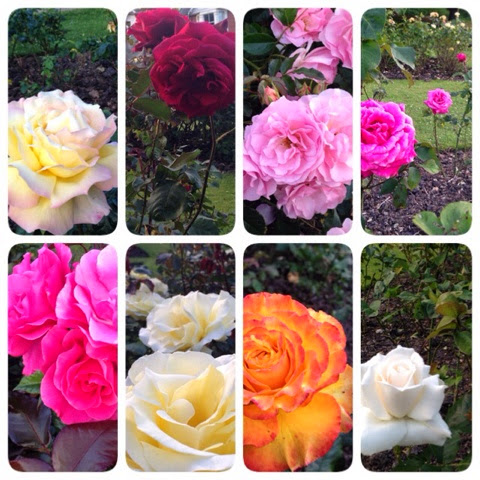 Such a cliché but I love roses, and they were in full bloom, beautiful. 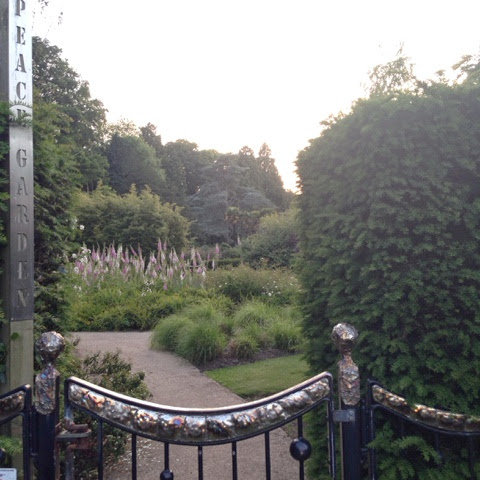 I had a little sit in the Peace Garden, it's closed off, no dogs allowed and I had it all to myself. 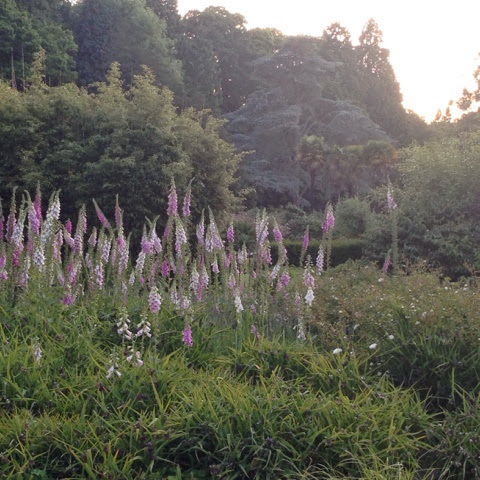 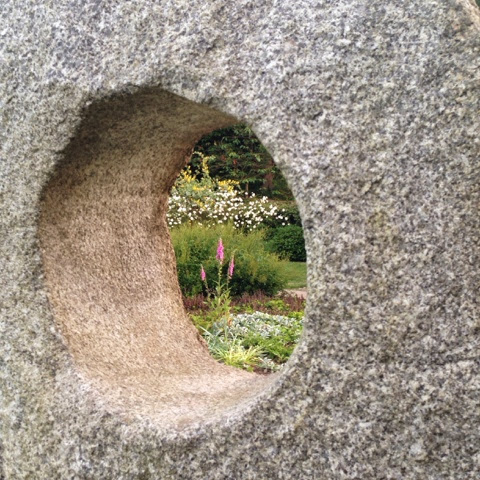 So under the bamboo I sat to contemplate, and rest my mind ready for bed, I made it home about 9.30 soul lifted and a smile on my face. 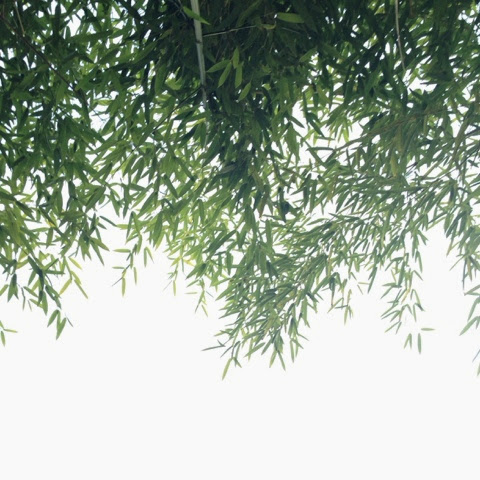 Excuse the less than amazing iphone photos, I may take the big girl camera next time. 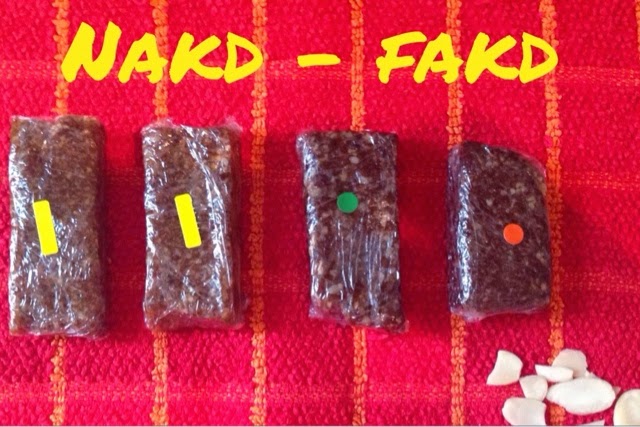 This weekend I made some of these beauties for snack time at work.

I keep reaching for the chocolate now I have a readily available vending machine and it has to stop. So apart from not taking money to work with me I had a go at making my own Nakd bars. 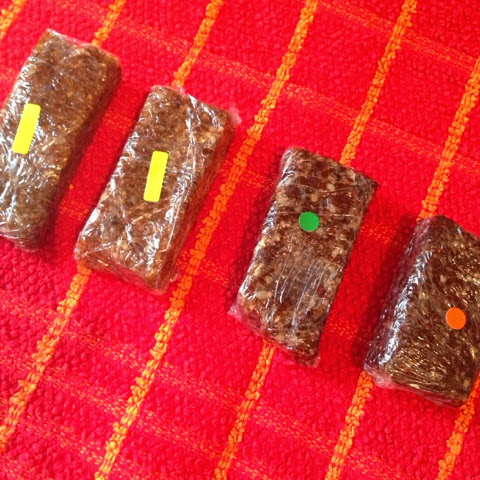 You would not believe how easy they were, I checked a few different recipes on line and it seems that providing you use equal amount dried fruit (mainly dates and sultanas) and nuts, you won't go far wrong. Chuck everything in a blender for a few minutes until everything is chopped up small and combined. Tip out and mould into whatever shape takes your fancy. Individually seal in cling film for freshness and you are done. Yum

So the yellow one is a version of pecan pie, the green one is choco mint, I used a mint options to flavour these, and choco orange with cocoa powder and the rind of an orange.

They all taste great, I might even go so far as to say they are tastier than Nakd bars, I guess because they are a little fresher?

Next time I might experiment with some flavours, maybe cocoa and cinnamon, ginger and lemon or even coffee I'll let you know how it goes.
Posted by Chloe D at 06:48 No comments: